The "Why" of Collecting Paint by Numbers 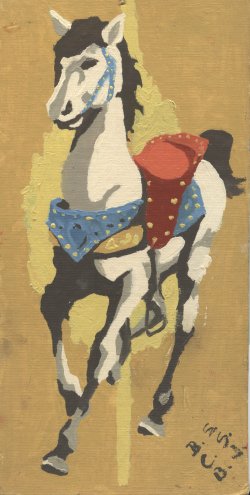 Previously, I gave you a (perhaps not-too) brief overview of the history of paint by numbers. Today, I bring you the reasons why such paintings were created in overwhelming numbers and are collected today.

Many will spout-off the notion that paint by numbers have always been the kitschy works of silly suburban conformists, but that’s simply not the case. Postwar life left the average person with more leisure time than ever before — and more money too. While passive spectator opportunities, like television, were a-plenty, the old “idle hands” mantra left many people equating leisure with laziness and wishing for something to do.

Karal Ann Marling, Professor of Art History and American Studies at the University of Minnesota, has written several books about the sensibilities of the 1950s. In As Seen on TV: The Visual Culture of Everyday Life in the 1950s she paints the PBN trend as an outgrowth of World War II hobby-ism rather than a sign of conformity:

National surveys taken in the 1930s, when the Depression curtailed spending on equipment and travel, disclosed a sedentary pattern of recreation: respondents were reading magazines and listening to the radio and visiting with friends. What they really wanted to do, however, was to play tennis and golf, plant a garden, go swimming or skating. In the 1940s, wish became reality. Between 1947 and 1953, revenues for spectator sports and amusements showed a marked dip, despite increases in population and income and the insatiable demand for TV sets. Market research proved that it was the heaviest TV-watchers who were liable to be most interested in painting a still life or reupholstering the living room sofa. Power tools and other do-it-yourself accessories were a $12 billion industry by the end of the decade; $30 million more went for amateur art supplies. “There seems to be a major trend away from passive, crowd amusements toward active pursuits that people can carry on independently,” concluded a highly regarded study of this “Changed America” with plenty of time on its hands.

More than other pastimes which grew during this time (such as collecting!), the do-it-yourself spirit was also a way for man, woman and

child to find his or her way in this new world. It was non-conformist:

Do-it-yourselfism, in particular, was the last refuge for the exercise of control and competence in a world run by the bosses and the bureaucrats. It was a throwback, a rebuke to a buy-it-in-a-box world of TV dinners and ready-made everything.

As Michael Kimmelman wrote in Art View; Painting by Numbers: How Bad Was It?, “Paint-by-numbers enthusiasts and Abstract Expressionists alike were affected by the same 50′s Zeitgeist: the tension between social strictures and personal freedom.”

And Klein knew it too. He was very selective in choosing the designs for Craft Master paint by number kits. Dan Robbins, Craft Master’s head designer, said this to The New York Times in 2001:

“Mr. Klein placed his bets instead on the postcard scenes and calendar art of barns in Maine, and fair-faced collies, pig-tailed Indian princesses and coolies in China-the pictures that America saw and smiled at when it closed its eyes to the realities of a nuclear age, urban sprawl and a growing multiculturalism. And masterpieces: though 90 percent of the art was original, reproductions like da Vinci’s “Last Supper” were best-sellers.

Painting now could be an enjoyable pastime, a therapeutic outlet; not only reserved for the trained and talented.

However, painting by a kit was a very American idea.

Marling says paint by numbers were, “the most American thing you can imagine in that you package up everything you need in a box instead of going through lengthy instruction in how to paint or how to mix colors. It was a personal experience for the painter.” She continued, “You could almost call it supermarket Freudianism.”

But you don’t have to take our word for it; in 2001, the Smithsonian had an exhibit on paint by numbers. 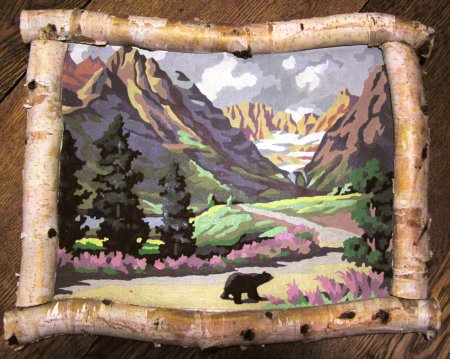 While PBN collecting began in the 80′s, the Smithsonian exhibit has given quite a boost to PBN collector cred — and to the prices of paintings themselves.

Naturally, the original designs of Dan Robbins are the most valuable. Printed on canvas (actually material made for window shades), these 36 designs are gaining respectability in the fine art world. But other works by artists such as Adam Grant can fetch hundreds of dollars too. Paint by numbers can also be collected by theme, with nudes, ballerinas, French scenes & celebrity paintings typically bringing the highest dollars. 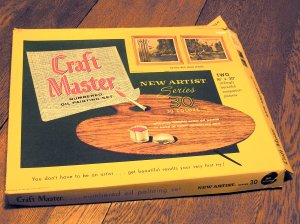 Some collectors are in love with paint by numbers for the historical reason; others for the artistic ones.

Does the fast rate automatically negate the possibility of first rate? Pletan collectors would have to say, “No.” And as Marling said, “It doesn’t make a damn bit of difference if they made a million of these sets; each person had an individual experience painting them.” And it shows.

While some object to the stamped boards of sameness which are to be painted according to ordained rules, we PBN collectors know that many did paint outside the lines, adding images, painting over what they didn’t like, or otherwise personalizing their works. And even when folks didn’t, they still produced unique folk art pieces. The kits may have been mass produced, but individuals created each painted piece.

Some of us PBN fans collect for both the history and the art itself. Which is why I’m not certain of the fate of this 1963 Craft Master paint by number we scored at a garage sale earlier this summer. We might paint it; we might not. 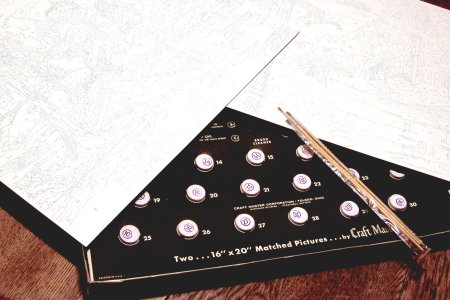 Many say that the paint by number hey-day is long over. They claim the it’s-not-art-it’s-conformism of the 60′s marks the official time of death for paint by numbers; yet the kits continue to be painted — and continue to be made. Check out kits by Bubbles The Artist, and the personalized paint-by-number kits from your photos available at 1-2-3 ART.

And we collect them with a passion. We don’t hide them either. Why would we?

Article written by Deanna Dahlsad of WeHaveYourCollectibles.com, which includes a weekly podcast, This Week's Story.