Proceed directly to the COLLECTION.

Who is the most exhibited artist in the world? The work of paint by number designer Dan Robbins has been displayed on more walls than that of any other artist. This was true in the past, is still true today and is most likely a record that will stand in the future.

Americans in the 1950s had the time and money to take up new hobbies and Max Klein, President of the Palmer Paint Company in Detroit was looking for an idea that could make anyone an artist and thereby expand the demand for paint. Dan Robbins, making a living creating washable paint sets for kids , was interested in the challenge. After months of trial and error Dan remembered how Leonardo da Vinci would hand out numbered patterns to his apprentices and thought, “Why not do the same for anyone who wants to paint but does not have the talent to draw or mix colors? All I have to do is create a numbered outline and provide the corresponding numbered colors.” He tried to explain the idea to Max but it was obvious that Max wasn’t getting it. Finally, Max threw up his hands saying, “ Don’t tell me. Show me. You’re the artist. 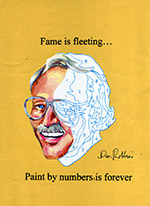 Robbins returned to Max's office with his first prototype, ABSTRACT NO. 1. It was an impressionist still life painted with tempera colors on cardboard. In Max's eyes, it could not have been any more ugly or any less marketable. But Max Klein was enough of a maverick entrepreneur to send Robbins back with instructions to design some “prettier" ones.

Taking paint-by-numbers from insight to product was not as easy as Robbins had imagined. A number of questions puzzled him. What would adults want to paint and how difficult should the paintings be to complete? How to contain the paints and what kind of canvas? And there were philosophical arguments about whether dividing a subject up into numbered areas to paint was an affront to the concept of “art”.

After tempering his enthusiasm with a lot of patience and hard work Dan designed six kits and Craft Master was born. Mr. Robbins says that it took compromise at each level to produce kits that made everyone feel that they had created their own work of art. Painting by number was appealing because it looked easy enough for anyone to do. But it was very difficult to make it look easy. 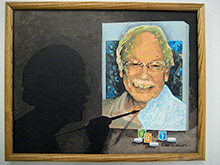 Initially sales were disappointing but it was not long before Robbins developed marketing plans that sent the kits flying off the shelves. Most famous of these was the giant billboard of a blank paint-by-number. Bleachers were set up for people to watch as each day another color was added.

Soon Robbins was launching an ever expanding series of kits and training a whole new crop of paint-by-number designers including the well know painter Adam Grant. Within two years, he had gone from a freelance contractor to head of art direction for the most profitable division of Palmer Paints.

Now anyone with the time and dedication could take a brush to canvas (and later, cardboard
panels) and confidently create art. Millions were doing just that. Leonardo da Vinci’s, neat trick might not have groomed a generation of geniuses in the Renaissance, but in Robbins' hands, the paint-by-numbers concept won over a generation of American hobbyists and as his fan letters continue to attest, he inspired legions of new artists. He also made painting and displaying art more democratic than anyone could have imagined.

Since the peak of the paint-by-numbers craze, Robbins has worked in product development and marketing for a number of companies. Today he is a popular public speaker appearing in universities and museums, including the Smithsonian, across the country. He is also the author of the most popular book on the subject: Whatever Happened to Paint-By-Numbers - A Humorous Personal Account of What it Took to Make Anyone an Artist.