Proceed directly to the Collection.
Doug James by Dan Robbins 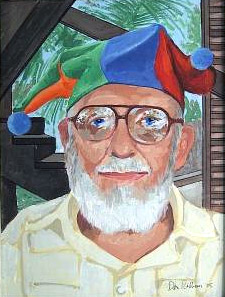 Doug James often referred to himself as “an old semi-retired art dealer in 19th-20th century American art.” Although he had been a collector of paint by numbers for many years, it was the Smithsonian’s paint by number exhibit in 2002, “Paint by Numbers: Accounting for Taste in the 1950’s” that peaked his interest in Dan Robbins’ concept of painting by the numbers. He saw this art form as “theorem paintings”, somehow tied up with the contemporary idea of providing original art which could be cloned by millions, a form he later termed as “multiples”. After painting Robbins’ Abstract No. 1, he wrote: “While paint by numbers weren’t ‘art’ at the time of their origin, they certainly are now, by virtue of ideas and concepts which have evolved into being.”

It wasn’t long before Doug James and Dan Robbins came together in a joint effort with Atlantic Beach Press to market his first 36 Craft Master subjects called “Dan Robbins Multiples”. Simply put, Atlantic Beach Press would acquire duplicate copies of Dan’s original 36 subjects, all painted by others. When signed, and dated, these became limited editions, then called, “Dan Robbins Multiples”. These early images, painted with varying degrees of precision have become quite collectible as icons of the genre.

During the course of their friendship, Doug and Dan teamed together in a variety of other paint by number related projects such as creating and producing thousands of Mona Lisa paint by number sets promoting the movie, “Mona Lisa Smile”. Doug’s Atlantic Beach Press published “By the Numbers”, a monthly paint by number news letter to subscribers. He promoted and sold limited edition Abstract No1 T-shirts, signed by Dan. Working with Larry Rubin (another paint by number collector). Together, they co-wrote “Early Craft Master Paint by Number Paintings”, a Collector’s Guide to Identification and Pricing, Keyed to the 1954 Craft Master Catalog. In the introduction is written, ”The passage of time has not dulled the work of Robbins, Grant and other Craft Master artists. As mainstream art collectors and dealers come to appreciate the very tangible influence these men had on the field of Post-modern conceptual art, the American public will re-discover it’s value as well.”

Doug James passed away in September 10, 2007. Given the opportunity, I’m not sure if he would have written anything more about himself, except, maybe, “Been there. Done that.” So, I am writing for him. He was my friend, my mentor and most devoted supporter. I suspect he’ll be pleased, knowing that he will be remembered for his contributions to the paint by number genre in general and to this Paint by Number Museum web site in particular.